CAN WE HOLD BACK THE “INFOCALYPSE”?

There’s a video out there in which an “Obama”, facing straight into the camera, is apparently making some inappropriately juicy comments about his successor. Anyone who’s seen it will know how well it’s made – nothing like the comparatively rudimentary ReFace app. But they’ll also know it’s fake. Deepfake. Deepfakes are a type of AI-generated synthetic media that’s destined to permeate almost every aspect of the audiovisual media that we consume within the next ten years.

The danger that lies behind synthetic media is that it is already among us, but we have not yet developed effective ways of responding to it. As our keynote speaker, Nina Schick, writes in her book “Deepfakes”: “AI was once the exclusive domain of science fiction, but it is now a part of our everyday life. It is getting powerful enough to make people say things they never said and do things they never did. Anyone can be targeted, and everyone can deny everything. In our broken information ecosystem – characterized by misinformation and disinformation – AI and deepfakes are the latest evolving threat.” 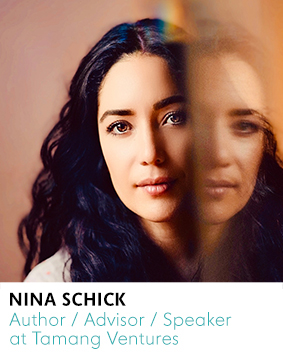